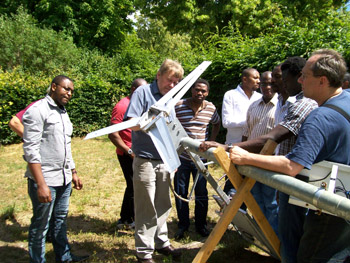 Development and construction of a wind convertor with a slotted vane. The slotted vane is based on a patent belonging to the engineer Khamas, Berlin/Damascus, who has allowed us to further develop and optimise the vane.

The slotted vane is quick and simple to construct and is superior to a comparable non-slotted vane if one regards certain construction principles. The slotted vane comprises a trapezoidal tailored panel with a slot that runs centrally along it, which ends shortly before the end of the vane with a drilled hole. The longitudinal edges of the panel and the slot are edged in accordance with a certain system. In addition, the two panel strips of the vane are diagonally offset at the vane insert point in order to lend stability to the vane. In previous years, technical colleges in various physics consortiums have tested and optimised numerous model variants of the slotted vane in our open wind tunnel. Slotted vanes provide the following advantages:

In recent years the physics department has been working intensively on the improvement of savonius rotors. Prior to constructing a savonius rotor suitable for operation, various model forms were optimised in the wind tunnel using cardboard models.A variant with three resistance areas proved to be particularly favourable and this ultimately served as the model for the construction of a rotor on the roof of the school. The savonius rotor on the roof of the school has a height of 2 m and a diameter of 1 m. A three-phase current generator with permanent magnets is flange-connected to the bottom end of the vertical shaft via a V-belt transmission. This delivers a voltage of 12V, which is then converted into DC current by a rectifier. The savonius rotor supports the photovoltaic stand-alone system with power, which is particularly important in the winter months. Literature particularly lauds the storm-proof nature of a savonius rotor because, according to the theory of the turbulence of air, further speed increases are avoided at high speeds. Our experience, gained during a hurricane in Berlin a few years ago, actually showed that savonius rotors without braking systems are in no way storm-proof despite this claim. During the storm, our rotor reached 800 revolutions per minute and could only be braked due to extensive personal efforts on the part of colleagues with the aid of timber planks. The vibrations that occurred as a result and the high rotational energy of the rotating mass of 100 kg would have destroyed the rotor and the frame if the rotor had been allowed to continue uninterrupted. As a result of this experience, we decided not to install a completed, larger savonius rotor with a diameter of 2 m. The new savonius rotor on the roof of the school is fitted with an independent brake that brings the rotor to a standstill at a certain maximum speed. For safety reasons, a subsequent restart can only take place by hand. The centrepiece of the brake is a suspension cylinder with a bolt that is attached to the rotor disk and runs with the rotor. At a certain speed, the bolt triggers an external brake mechanism due to the centrifugal force. Despite the low level of efficiency (in comparison to conventional wind turbines) of 12%, the use of savonius rotors has the following advantages: